Okay, sooo...  I am easily bored.  Like, even more easily bored than I thought and recreating icons I've already made is like the MOST BORING EVER AND OH MY GOD I WANT TO DIE. UGH.  If I saved .psds that would be AMAZEBALLS and then I would know what the mysterious past!me did.  I did not.  So I do not.  / #firsttutorialisutterfail

THE MONSTER GROWS & GROWLS WITH EVERY PASSING ... THING

aeriiths
So I started doing this and then whined and complained until I was fed up with my bullshit and threatened to take away my internet privileges for a whole five minutes so I decided to do the same thing sort of but get a new icon out of the whole dealie so my inner five-year-old would stop going, "THIS IS STUPID, I WANT TO GO TO THE ZOO.  I'M GONNA HOLD MY BREATH UNTIL FOREVER.  YOU'RE SO DUMB, YOU DIDN'T DO THAT, YOU DIDN'T EVEN KNOW THAT WAS A THING UNTIL YESTERDAY.  WATCHING A DOCUMENTARY ON SAND WOULD BE MORE INTERESTING THAN THIS.  I HATE YOU, YOU NEVER DO ANYTHING FUN.  GO WATCH LAW & ORDER AND EAT ICE CREAM OR I'M NOT GONNA TALK TO YOU AGAIN EVER IN ALL OF EVER."  You can see why I needed a new plan.

Sooo... we'll start with this Teen Wolf cap (I AM obsessed with that stupid show, stop judging me or I'll throw pillows at you) from

grande_caps.  I tried to pick a similar-ish cap that lent itself to the same wide crop and had enough light to play about with.  Also, it's still Jackson... so there.

For this tutorial, I'll be working on 200x200 canvas but I'll let you know the inside skinny: I always work on an already icon-sized canvas.  I know that like NO ONE else does but it pisses me off if I lose even one teensy detail going from 200 to 100 and then I spend ALL MY TIME obsessing over how to get back what is now likely lost for good.  But, yeah, it's bigger this way so you'll be able to see more of the stupid stuff I do.

Very coolly, I already knew that I was going for this composition when I started so I knew to crop it wide.  Sometimes I so have plans (not regularly).  Now, because the cap is not quite center, I knew I was going to have to add more negative space to the right side which means you want to take that into consideration when you're plotting out the width of this sucker. I went with 189x110 (the height is much smaller than the original, I know).  I duplicated the image, placed it under the original and shifted it over to the right as far as I wanted it to extend and merged.  Then I created a clipping mask so it would only color the image and not the background, used the color picker and (I know you can't really tell because it's so dark at the moment) but I colored the same brown on the left side around Jackson's shoulder and then black on the rest with a soft brush at 17px and Gaussian blurred it at something like 0.7.  I ended up with a 235x110 image.  HOORAY!!!  Now I get to center it how I want! 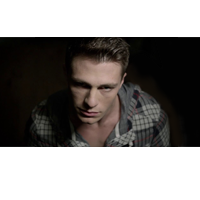 ← here's what we're working with atm

Now, I prep my base in the same exact way for every single icon.  I shooould not, but I do.  First we do Levels (cmmd + L), Curves (cmmd + M), Hue/Saturation (cmmd + U), Color Balance (cmmd + B) then onto Image → Adjustments → Brightness/Contrast || Vibrance || and Shadows/Highlights.  Of course it's never the same values!  Then I check out Auto Tone, Auto Contrast and Auto Color.  I rarely use them and when I do it's usually on a duplicate image of the original so I can lower the Opacity because I almost never want the full effect.

Don't worry about any of the grainy-ness or any of that or how odd the brown/black combo on the right looks. We're not done playing by a long shot.  Now, in the original I don't think I did much more than add a blue/yellow Gradient, a few other blue lighty textures and splayed it across Jackson's face and added some text, did my end-of-icon ritual and called it a day.  I do not think I went TEXTURE CRAZY like I pretty much always do.  THE ORIGINAL WAS MEGA SIMPLER, WHY DO I DO THESE THINGS.  BUT HERE I'VE DECIDED I WANT GREEN NOW.  This will take some texture-ish magic.  First I've made a Gradient of Green(c3ff68)/Yellow(fff99d).  I think I changed the angle to something like 162 but, regardless, it ended up with the darker green over the shadows on the left and the lighter yellow on the right and set to Color Burn.

Okay, so on come the textures - (these are clipping masked onto the Auto Tone layer, NOT the original layer) - there be a lot.

lumsx.  I made it green (I don't remember what the exact number was on Hue/Saturation, sorry), free-transformed at 90 degrees, set it to Soft Light, lowered the Opacity to 61%.

← I think it's a blurred

← by ?.  I got it from a tutorial from somewhere somplace with some things???   I used this twice.  Soft Light, 100% and Screen, 56% - I masked away the bits that covered Jackson on the Screen layer.  I created a new layer, clipping mask and used the color 555b01 to cover the screened version and set it to Hue.

← now here's where we're at

I took that layer and duplicated it twice and moved it on opposite sides of our original image so I had three levels of Jackson and then stamped visible (cmmd+opt+shift+e).  I resized to 100x100 because text never looks right (for me) going from big to small so I like to place it on the final image size.

Now, before the text comes along, I added this texture because I was a bit bored with all the uniform greenness - (I KNOW I SAID I WANTED THAT, MY MIND HAS CHANGED NOW.  I AM A UNIQUE AND BEAUTIFUL BUTTERFLY, DAMMIT):

mm3butterfly.  I set it to Screen at 84% and used a new layer filled with a7ba59 to color it, setting it to Hue on a clipping mask. I masked away some of the lighty bits with a brush on 23% opacity or something but I went over a few places more than once so that's not suuuper helpful.  :(  It's beginning to look a bit more like my zaniness now, THANK GOD!

NOW TEXT, HUH-FREAKING-ZZAH!!!
So after considering it for .5 seconds I decided I wanted it to say: "more than just a PRETTY FACE."  (that is how long ALL my text decisions take *puffs out chest with stupid pride*) Actually I wanted it to say: "more than a PRETTY FACE" but the first line looked better longer than the second.  I think(?) in the original I just used an Arial font at different (small) sizes, all caps, with the middle line italicized.  I think(?) it says: THE MONSTER GROWS | & GROWLS | WITH EVERY PASSING uh... MOMENT?  BREATH? SECOND?  I don't know, I made it up.  It's not like a lyric or something.  I plucked it out of my zoo-occupied brain.  THERE ARE BEARS THERE.  BEEEEARS!!!  Anywho...

mm3butterfly texture again over top at 70% and masked some more of it away with a 23% opacity brush.  Now, in all likelihood I would probably perform my end-of-icon ritual and call it a day but instead we're going for the same composition as the original so let's continue, shall we?

Note: in the original, I had the text on every panel but that was just tooo busy here.

So now I use the Rectangle Marquee tool and cut out the middle image, create a new layer under the one I'm trying to cut out and create a clipping mask with it, fill the bottom layer with whatever color and merge them together.  Now I have only the center panel on a layer.  Now I free transform at 90 degrees, move the oringinal three-level image off to the side so Jackson is centered in the new space.  Duplicate the 90 degree angle layer and free transform so the W and H are at 80.5%.  Repeat.

← now we have this bananas magic.  HOORAY!!!

Note: In the original I didn't have a texture that gave the image borders so I just drew a line on the edges of the 90 degree image with a hard-round brush at a small size with the color d8e636 using a clipping mask.

Now onto our end-of-icon ritual.  \o/  I also do this to every icon though I often end up not using different steps of it so it's a bit more varied.  I HAVE RANGE, DAGNABIT.  Duplicate our bananas icon, Gaussian blur at 4.3, set at Soft Light (lowered to 66% here).  This is going to make your colors more colorful and your shadows shadowier.  Duplicate your bananas icon again and move the duplicate to the top.  Use High Pass at .3, set to Overlay.  Now, when it comes to High Pass (which is used to sharpen) and I have levels or text, I erase over the lines and text so it doesn't sharpen those.

Okay, then we merge everything, duplicate, take a small smudge brush set at 23% and carefully smudge.  Then we take the blur tool at 10% and go over the text and the edges of the levels.  There are a lot of times when I do this and end up not using it AT ALL or use it at a super low opacity but it's part of the ritual now.  THE RITUAL CANNOT BE CHANGED.

Okay, but seriously TOO MUCH SMUDGE.

← Lowering the smudge-y down to 33%, we get this.  Our FINISHED PRODUCT.
Original → New Zany Nonsense

POSTSCRIPT WARNING: I DO KNOW THAT I AM IN NO WAY AWESOME ENOUGH TO BE OFFERING A TUTORIAL (HONESTLY SUUUPER AWARE OF IT).  I don't know what happened, I fell onto my keyboard and all this stuff eked out.  :P  I like CRAZY VIBRANCE and COLORS and BRIGHT so feel free to take those steps out if you like. ;)  Really take or leave whatever you like - if I helped even a little bit then YAY.  I am CONSTANTLY learning new and better techniques and realizing that the things I do are retarded soooo... yeah.  I would not be surprised if a bunch of this was totally pitiful, LOL.  Be nice about it though, pat me on the head and say, 'Aw, look at what you did today.  I'm gonna hang it right up on the fridge, pido-squido, right up on the fridge.'